I built a doghouse! And not just any doghouse.. a stinkin freakin beautiful (s.f.b.) doghouse!! My two huge dogs

Austin and Houston have been indoor/outdoor dogs for the past ten years, and now moving to the farm, they need to just be outdoor dogs. So , I promised Austin and Houston I would make them a house:)  I thought about buying two large dog houses but after researching I realized that not only was it going to cost over $300, but that even the extra large houses were so small that I knew my dogs would barely fit through the door let alone be comfortable in them.  So, I began my own dog house building plan.

I have used power tools in the past for small, minor projects but never anything like this, so I was a little concerned at first but I soon overcame and just went at it!  It was really exhilarating to take a simple sketch from paper and start actually building and making something.. I would highly recommend it! 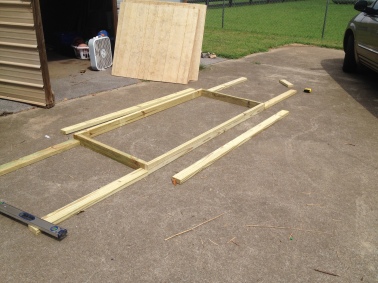 framing cut and layed out. 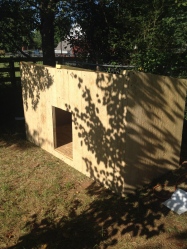 All in, I spent about $150 in materials and got it almost complete in one day but had a slight miss calculation on my roof so I had to pause my project for the day to be able to go get more roof the next day.. but I could have done it in one day if i had not messed that up:)  I don’t want to boast too much but I am pretty stinkin proud of myself on this one.  And I think Austin and Houston are pretty happy also, which makes it even better!

This is Austin without his head.. he doesn’t sit still for long enough to get a good pic.. Ill get a good one soon.

Yes.. I was inside the doghouse with my dogs to get them to come in at first:) It’s pretty cozy!

PS  I would give a step by step tutorial on this but I had so many changes I made while I was building from my original plan that I’m pretty sure I would mis-guide you in your process and you would not like me very much then.. and so this is merely just to motivate and inspire you to get out there, use your imagination, get sweaty and dirty, and build something!

3 thoughts on “Dog House in Almost a Day”

Blogs That Inspire Me

Goat Milk In My Coffee

The joys and laughs, woes and groans of when two become one and a family of four.. and so much more.

The Science of Mom

The Heart and Science of Parenting

The joys and laughs, woes and groans of when two become one and a family of four.. and so much more.